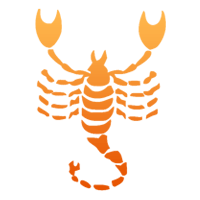 
People who are born under the sign of Scorpio have a deep desire to create something new and abolish something old. They look ahead. They have a strong will, inexhaustible energy, and they love the battle. This is due to the influence of Mars, which is, together with Pluto, Scorpio’s ruling planet. Scorpios are totally self-controlled; they always appear to be cool and relaxed, while inside, they’re a seething volcano. Only sometimes does this inner turmoil erupt and manifest itself in an outburst of fury—then they crush everything that gets in their way. If they are trapped, Scorpios can act with cunning: this is the poison sting that is their ultimate defense.

Scorpios are versatile individuals. They can react harshly, but in their hands, kindness can be just as effective. As a water sign, Scorpios have very strong feelings. They are very sensitive when it comes to themselves, but they also have a distinct sense of empathy. It does not throw them off the track emotionally if someone does them wrong or offends them, but they’re not the kind to forgive and forget. If someone plays a trick on them, they’ll be sure to get their revenge. Still, their memories are just as long when someone does them a kindness. Once you have the trust of a Scorpio, you can count yourself lucky because their devotion means steadfast friendship until death. One of the best attributes of Scorpios is their sincerity:  Scorpios do not lie. They will stick to the truth – for better or for worse.

Scorpios live in extremes. They either want to be at the very top, with all the power that goes with it, or they despise everything material and live ascetic lives, dedicated to the spiritual. They often develop mystical, occult tendencies. They are drawn to the gloomy and the mysterious. This is the influence of Pluto, one of their ruling planets, and king of the underworld.