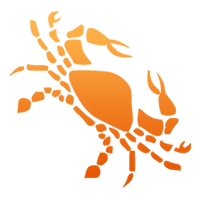 
The regent of Cancer is the Moon, and like the tides, people born under this sign react to the phases of the moon in a mysterious way. Sometimes, they appear bright and cheerful, like the silver moon at its fullest, and then again, sometimes they are as dark as the night in which the new moon doesn’t shine. Their quickly shifting moods and tendency towards petulance will follow them through their lives. Cancer-born are very emotional people, and they are easily influenced, even though they like to keep a certain amount of distance from other people. On the one hand, they’re indecisive and shy, yet on the other, they’re very convinced of themselves. They have a tendency to be hurt easily – oftentimes Cancer-born are considered oversensitive by other signs - and they’ll never forget a slight, or let an injustice slide. Cancer individuals will bring it up and rub it in.

Who can blame them, though? For Cancer-born have a real talent for finding sore points and poking at them. They are very empathetic, and therefore able to easily sense the weaknesses of others. There is hardly anything sadder than a frustrated Cancer. In their desperation, they can become rather snappy and vicious. Fortunately, the mutability of the Moon prevents this condition from being too permanent. Thanks to their sensuality and joy of life, they know how to regain their balance and be themselves again.

In order to feel comfortable, Cancers need surroundings in which they will be on the receiving end of as much love, devotion and understanding as possible. Cancers are true family people. They place immense value in having a cozy home, and they are ready to do anything for their families, to the point of self-deprivation. This is one reason they are disappointed again and again; their efforts are simply too difficult to match. They find it difficult to accept criticism, and yet they’re also skeptical when they get praise. They tend to comfort eat, which is why many Cancer people have stomach and bowel troubles.