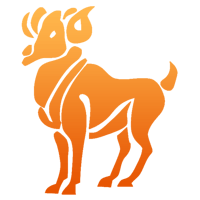 
Most Aries burst with energy. They react fast and are always prepared to attack – like the war god Mars. The Aries man is an adventurer of the moment. No woman – provided he is attracted to her – is saved from his passes. The Aries man endeavors to be perfect, also in love. He likes to present himself as a sex athlete and he delivers – he does not disappoint his lover. He tries much and often until he has found the right one who he will marry. The Aries man is amazingly faithful to his chosen one. As long as she looks up to him he will fulfill her every wish. But not every woman is so uncritical to think of her husband of the greatest. Then, there are often disputes that can develop into a marital row. But the Aries will not give up his family so fast. He is pig-headed and persists on decisions he has made. The relationship to his job is determined by the aggressive attitude of the war god Mars. In this respect his perfect job is soldier. Also as a policeman, firefighter or customs officer he would feel well. Whatever job he practices – he will always urge upwards eagerly. Superiors like his pursuit, his ideas and his zeal. If business is going well, no extra hour is too much. If his work is not praised he will look for another job where he is praised accordingly. There are Aries who change their job three or four times in search for appreciation. If he sets his mind on getting to the executive floor then an Aries will make it in most of the cases. He has a combative spirit and pushiness. As boss he will be anxious to transfer his zeal to his employees. He is generous when he is content but very intolerant when it comes to laziness and unreliability. This ends in a bounce quit fast.