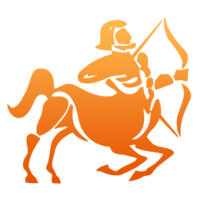 
The ruling planet of this sign is Jupiter, the highest of the Olympian gods. He is jovial in nature, and often characterized as generous, altruistic, and open-minded. But he can also be merciless when someone dares to rebel against him. He is the guardian of law and order: people under his influence appear to be balanced on the outside, but inside, they are often quite ambivalent. This is because Jupiter not only stands for generosity and sincerity, but also arrogance, ostentatiousness, and pleasure.

It’s typical of this two-faced sign that it combines the highest morals and utter carelessness. Sagittarius are prone to self-denial. They sometimes lead a double life: one moment, they’re impeccable and completely righteous, the next, they’re secretly giving in to their deepest desire. Because they place a lot of value on appreciation in society, they sometimes – despite their sincerity – do not practice what they preach.

Sagittarians love their independence above all else, and they are incurable optimists. They always strive for fairness, but as they’re fond of making quick decisions, little injustices are inevitable. They usually notice these inequalities quickly, however, and try to make up for them. Their optimism is often connected not only with openness, but also with great charity. They are career people, who do not feel well in subordinate positions. They seem to have the most persistent luck: setbacks are a game to them. Their limitless optimism means that every challenge increases their ambition.