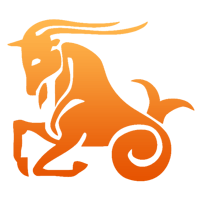 
People who are born under Capricorn are ruled by Saturn. Like the double-headed god, Janus who the Romans associated with Saturn, Capricorns look both forwards and backwards at the same time. They strive to move forwards, but they draw their lessons from the past. Hardly any other sign has as much ambition as a Capricorn, nor will most of them get as far. There’s a reason Capricorns are represented by the goat: they are avid and skilled climbers, who are able to find the best path in an inhospitable alpine world. Their ascent is sure—and even though the way may be steep, it doesn’t seem to require too much effort or hardship from them.  Capricorns work hard and persist where others fail. Their motto is simple: do your duty. They tend to identify themselves with their work because their careers are their conduit to success and social triumph. They need society’s approbation to validate their hard work.

Some Capricorns are quite materialistic. To them, money is very important, and they’ll do anything to earn it and keep it. They not only dream of owning nice things, they also make these dreams come true by saving funds and investing wisely. Capricorns are generally very conservative people: they don’t see their task as creating something new, but rather in keeping everything on track. They prefer the constant and the solid. Most of the time Capricorns are rather serious people, who appreciate a dignified and decent appearance. They would never let themselves be talked into dishonesty, and they do not like intrigue. Their strengths are in their perseverance, sense of responsibility, cleverness, and blamelessness.

Capricorns sets standards, not only for themselves, but also for those around them. They appreciate people who act honestly, who are clever and prudent; they distance themselves from those who fail to meet these requirements. They have a good sense of the weaknesses of their fellow humans. When they notice deceit, they’ll try to bring it to light by all available means. This is not for any personal vindication; rather, Capricorns will always act in the favor of the social contract.